Retirement Annuity – Sometimes You Do Get The Timing Right

Home » Retirement Annuity – Sometimes You Do Get The Timing Right

Back in 200, at the age of 51, I decided to purchase a retirement annuity with the proceeds from a small pension pot that I had.  Back then there wasn´t much flexibility in what you could do and although I would have preferred to transfer it into my SIPP this option wasn´t available under the then legislation.  So an annuity it had to be.

So I took my 25% tax free which I reinvested and using an online annuity provided purchased a Legal & General level annuity with a spousal pension on death and 5 year guarantee.  The annuity rate was 5% with payment yearly in arrears (£1250p.a.).  I wasn´t too impressed with the payout but it was the best option at the time.  12 years on I have zero regrets.  For once in my life my timing was near perfect. Cashing out just before the market crash and before the collapse in interest and annuity rates.  I wish I could say it was prescience – but no – pure good luck.

Out of interest I thought I´d take a look at what would have happened if I had had the option of drawdown.  So I analysed what would have occurred if I had invested the £25k in a low cost FTSE All Share fund in April 2007 and drawing down annually starting in April 2008 assuming 0.25% costs and an annual drawdown of 5% fixed.  This is the result:- 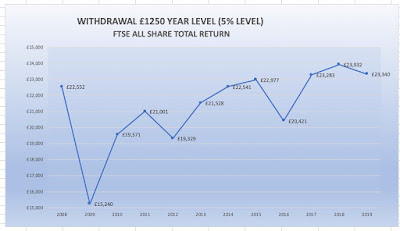 In April 2019 the capital would have declined to £23,340 – not too bad considering the market crash of 2008/9.  But if I were to use this capital to purchase an annuity, now approaching 65 I would obtain an annuity rate of 4.8%, lower than the rate I obtained when I was 12 years younger.   So as they say – Timing (and luck) is Everything.