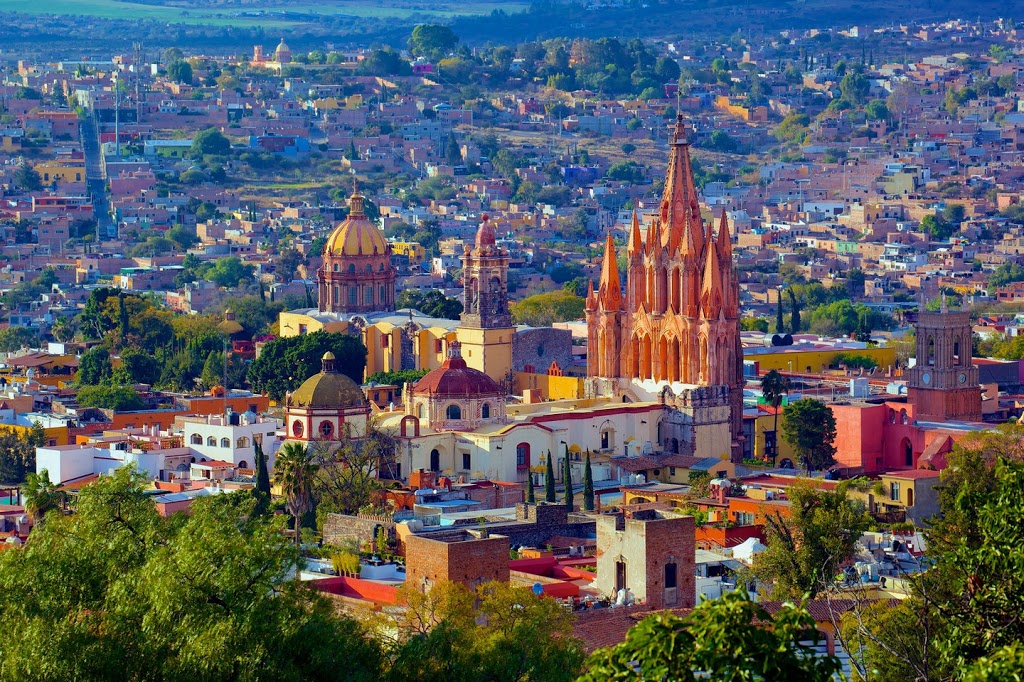 Locked Down in Mexico

Home » Locked Down in Mexico

I was motivated to write this post from lockdown in Mexico after being shocked by the recent images and interviews from the UK – photos of passengers boarding the London Tube without face masks, an interview with Tim Martin of Wetherspoons about the supposed excellent safety of pubs, a secondary school pupil saying that face masks were voluntary in communal spaces at school and the surprise that only now will shop employees have to wear face masks.
A bit of background as to why I´m stuck in Mexico.  My partner is Mexican and we spend our time between Mexico and UK.  We had everything organised to return to the UK in May but in February we were struck by two events – Covid-19 and my partner being diagnosed with cancer.  So travel was out of the question.  Gaby started 6 weeks of chemo and radiation treatment in March and the chemo doctor stated clearly that it she became infected with Covid then it would most likely be death by virus not cancer as her immune system would be severely compromised by the treatment.  Fortunately it looks as though the treatment was successful but we´ll know more in October after the next bout of CT scans and blood tests.  In the meantime here we are in Mexico hopefully medically fit to travel but unable to risk the 11 hour flight to London until the virus disappears or a vaccine arrives.
I have been very struck by the different governmental approaches to Covid in the UK and Mexico.  The government in Mexico can be rightly criticised for their approach to Covid.  Surprising for a socialist president Lopez Obrador didn´t want to increase government borrowing to provide economic support to businesses and individuals and as in Mexico there is no financial safety net such as Universal Credit so lockdown was very limited –  non essential businesses were shut down for a couple of months, but as companies were legally obliged to pay the wages of furloughed employees a longer shutdown was never going to be possible.  The consequences can be seen from the number of cases and deaths in the graphics below and with one of the lowest testing levels in the World and a reluctance of families to have Covid put on death certificates for fear of the whole family being put in quarantine and lose all income these figures are a significant understatement of reality (admitted even by the government) :- 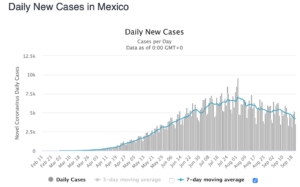 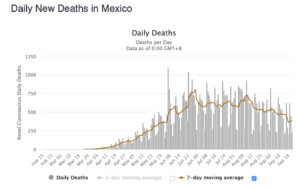 However just like the USA the federal states can apply their own restrictions and here in San Miguel de Allende  the local government actions have resulted in the town having one of the lowest rates of Covid in Mexico. 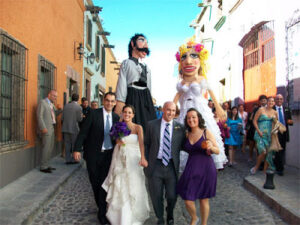 San Miguel de Allende is a tourist destination, voted (as beautiful as it is, still much to my surprise) as the best city tourist destination in the World several years running and is now a United Nations World Heritage Site.  All tourism was halted in March.  Hotels, bars and restaurants closed.  Face masks were made compulsory in all public places and shops – for customers and employees and the usual sanitation procedures enforced – hand sanitation, shoe disinfection, temperature checks on entering stores, one way systems in large shops and entrance restricted to one family member.  The big stores and supermarkets upped their security personnel so there was never a question of not complying with the rules or you would in short shift be in the back of a police car heading for the local jail!
Check points were established on all roads entering the city, temperatures checked and tourist visitors turned back.  Spray disinfectant booths were placed at the entrances to the main plaza (I´m not sure what this achieves!).  Of course at first there was some non compliance – but non compliant businesses were shut down immediately for a few weeks and the first few face mask rebels were subjected to an immediate 36 hours in jail with a fine – this soon sorted the problem out!  Weddings and social events were banned and on weekends that coincided with national holidays ¨Ley Seca¨ was declared – a complete ban on all sales of alcohol in order to restrict drunken private gatherings.
Out of site of the authorities there is, of course, lots of rule breaking.  Youngsters socialising without social distancing and without face masks, small shops not complying with the rules, customers without face masks and on public transport many passengers only putting on face masks when entering urban areas where there is the risk of being spotted by police.
Without doubt  Covid restrictions have had a severe effect on a tourist based economy and with no government support for employees and little for companies there has been severe hardship. Voluntary groups organised food parcel distribution and the local supermarket donated 2 food packages for every one donated.
Its only now, six months after the initial lockdown  that there has been some relaxation of restrictions.  Hotels can operate at up to 30% capacity providing they comply with hygiene rules and send their employees on a short Covid prevention course.  Bars and restaurants are operating with capacity limits. but with more tourism it is inevitable that that Covid cases will increase in San Miguel.
I suspect that in Mexico as a whole there will be a gradual reduction in cases not the rapid post lockdown declines seen in the UK, Spain and France which are then followed by a big second wave.  I guess it will only be in 12-18 months time that we will be able to make a true comparison between countries when historic and Covid era death rates can be compared.
In the meantime we live in partial lockdown. Limiting shopping trips to large stores with strict hygiene rules, allowing family and friends to visit only if they have been in quarantine and are following the rules and occasionally eating out providing it´s in the open air (at least we have great weather here).  Our biggest risk concern is the maid who uses public transport so she always wears a KN95 face mask in the house, we open all windows and turn on the ceiling fans  – we are sure that the greatest risk is from aerosol infection. So far so good – plenty of time to research retirement finance and fingers crossed for a vaccine or effective treatment sooner rather than later so we can get back to normality.
LOCKDOWN SAN MIGUEL DE ALLENDE No Comments