Not All Retirees need 2 to 3 Years of Cash

Home » Not All Retirees need 2 to 3 Years of Cash

Not All Retirees need 2 to 3 Years of Cash

In the next series of posts I intend to address some of the most common questions posed on forums such as the  Reddit UK Personal Finance and FIRE forums.

The first I´m going to look at is Emergency Cash.  Subsequent posts will look at:-

Emergency Cash for The Retiree

The popular advice for working-age people is to hold an easily accessible emergency cash fund that represents at least 6 months of expenses.  This is sound advice for people during their working lives when unemployment, illness and kids can severely dent finances.  Thinking way back to my youth I am not sure how feasible this is for many young people but it is good advice especially when one has family responsibilities.

The advice for retirees is very different and the situation of the retiree is very different.  He is less liable to financial shock such as unemployment or illness which can hit income hard and his expenses are likely to be far more predictable than during his working life.  (I am purposely not considering the potential financial burden of long-term care here).

Experts often advise retirees relying on investment income from personal pensions and ISAs to hold 2 to 3 years of expenses in cash. This is primarily to protect against the need to sell shares when the market is depressed.  Even Warren Buffet recommends that his heirs should hold 10% of their inheritance in liquid assets to avoid the need to sell equities during market downturns, although I guess most of us could live out our lives in luxury on far less than that 10%!

My own view is that a small cash fund to cope with variations in cash flow demands and to cope with the big predictable one-off expenses is essential unless one is to rely on credit cards to smooth out the cash flow. The size of this cash reserve will depend upon the individual´s situation but a little time spent on a spreadsheet or one of the financial planning applications should produce a reasonable cash flow forecast and determine the biggest likely cash hits.  This cash needs to be held outside of tax-sheltered accounts such as SIPPs and ISAs.

The use of a cash reserve to counter market crashes and minimise sequence of return risk (market crash or high inflation) is a different issue and whilst it is reassuring to have a chunk of cash available depending upon the configuration of investments it isn´t always essential and not ideal given the often below-inflation rates of returns of cash.

The 4% Rule Says A Cash Reserve is Not Needed

William Bengen´s 4% rule has been shown to work whenever a retiree starts retirement.  Even starting out at the onset of the worst market conditions a retiree would not have outlived his retirement portfolio.  Of course, there is no guarantee that history will repeat itself and the 4% Rule was based upon a US investor.  Research shows a UK retiree should plan on a 3% to 3.5% withdrawal rate to ensure the same level of safety but the same argument applies – history shows that the vast majority of investors will not run out of money and that most will leave behind a large inheritance.

The problem with adopting a very conservative drawdown percentage is that the retiree will be sacrificing potential income. For some, this won´t be a problem, and many wish to maximise the inheritance of their heirs.  For others, this will mean having a more frugal lifestyle than is warranted. However, combining a conservative withdrawal rate with a variable withdrawal strategy such as that proposed in a previous post  Variable Drawdown can provide the retiree with peace of mind and the potential to withdraw at a higher rate if markets perform well.  No additional cash holding should be necessary.

The power of variable Drawdown can be seen from the table below which uses the technique as described in my post Variable Drawdown.    Almost independent of the initial drawdown % the average income over a 35 year retirement is similar and is around 70% higher than using a Bengen type inflation-linked withdrawal with an initial “play safe” 3.1% withdrawal rate.

A variable drawdown strategy provides an additional level of security and the potential from a higher level of income and obviates the need to hold significant cash outside of the retirement portfolio.

A Typical Bond/Equity Portfolio is Holding “Near Cash”

Although multi-asset investments such as Vanguard´s LifeStrategy are deservedly popular there is a big advantage in splitting the equity and bond holdings and in its simplest form having two holdings – say a global index fund/ETF and an all gilts fund/ETF.  Certainly not ideal from the administration point of view but it offers the flexibility to use an Income Harvesting strategy or the abilitity just sell bonds in preference to shares during market crashes.  Basically using bonds as a cash reserve but maintaining this within tax-sheltered accounts so that portfolio rebalancing or Income Harvesting may be employed.

A gilt ETF such as Ishares IGLT holds a range of gilts with varying maturities.  28% of IGLT is in gilts with less than 5 years maturity which will have limited volatility so can almost be considered cash.  But the big advantage of gilts is that they are negatively correlated with the stock market so tend to increase in value when the stock market declines.  So in many respects, a gilt holding is preferable to cash to compensate for market falls.

Income Harvesting is an alternative to conventional periodic portfolio stock/bond re-balancing.  There are many different versions but all aim to provide a higher Safe Withdrawal Rate (SWR), higher final portfolio valuation, reduced risk of running out of money, and protection against a poor sequence of return. The well-known three-bucket strategy is one such example.  Another very effective strategy is “bonds first” where as the name implies the retiree draws down on the bond holdings and when exhausted draws down on the equities so giving the higher growth equities more time to increase in value.

The performance of some of the more common techniques is shown in the table below based upon an initial UK 60/40 equity bond portfolio. 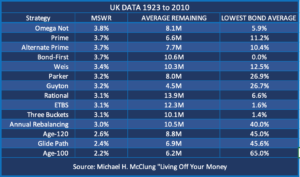 Within the techniques sampled there are 9 that permit a higher SWR than for conventional annual rebalancing, generally at the expense of the size of the final portfolio value.  In all these cases the bond holding falls below the initial 40%, in some cases to negligible levels.  This will result in a level of portfolio volatility that many retirees will find unacceptable.

Undoubtedly a two fund portfolio offer the investor the opportunity to minimise cash holdings and the potential to achieve a higher SWR than is possible with a multi-asset fund but my own decision was that     Variable Drawdown offered similar or better income potential, safety, and ease of administration.  The ability to opt to take income solely from bonds rather than equities and bonds is a big advantage of having separate bond and equity holdings providing one has the motivation and capacity for the required administration.

Retirees who are interested in finance and investment will probably be very happy to manage their own portfolios  – at least in the early years of retirement.  Longer-term simplicity of administration may be a priority as mental capacity diminishes and certainly, not everyone is interested in managing their own investments but many are reluctant to hand over control to a financial advisor.

Multi-asset funds such as Vanguard´s LifeStrategy range offer a simple solution and if held directly with Vanguard it is only necessary to specify the monthly/quarterly/annual income required and they will sell the necessary units automatically.  No worries about annual rebalancing or manually having to sell units to meet income payments.

Of course, it is possible to implement a Variable Drawdown strategy if desired but it is not possible to independently access the bond portion of the portfolio. so during market downturns equities will be sold off at disadvantageous prices.

If the initial withdrawal rate is conservative, say 3% or less then there should be a negligible risk in sailing on regardless during a market crash.  A higher SWR implies greater risk and should high inflation or a market crash occur during the early part of retirement then action will be required to reduce the level of drawdown income – perhaps by 50%.

Say this market crash occurs 10 years into retirement and the initial SWR was 4%.  Due to the increase in income withdrawal as income has increased by the rate of inflation plus some reduction in the value of the portfolio the effective withdrawal rate will have increased to around 5.5%.  If the retiree accepts a reduced withdrawal income for 5 years to be topped up from cash then he will need a cash reserve of around £14,000 for every £100,000 of the initial portfolio.  This is pretty close to the 3 years of expense reserve often stated.

A retiree using a multi-asset fund, therefore, has three choices if he doesn´t implement a Variable Withdrawal strategy:-

The emergency cash requirement of a retiree using drawdown isn´t as simple as providing for 2 to 3 years of expenses.  Everything depends upon the investment and drawdown strategy he adopts.  A simple approach using multi-asset funds implies a trade-off between the initial withdrawal rate and holding a cash reserve.   A two+ fund equity/bond portfolio provides more opportunities to maximise income whilst having more protection but involves much more administration which may be difficult in the later stages of retirement.